I've noticed a big uptick in Artisan by Alfresco grill and outdoor kitchen business so I wanted to dedicate some time to it on the blog.

The Artisan series of grills is a de-featured version of it's big brother Alfresco. The key point thought is not to focus on the "de-featured" aspect, but instead to consider the various similarities which they share.

Artisan professional series (I won't focus on their American Eagle series which is truly a de-featured grill and is more focused on the builder trade) offers grills both as built-in heads and on freestanding carts.  Sizes are simple - 32" and 36"

Here is a photo of the Artisan 32" grill head, model ARTP32, in a built in application. 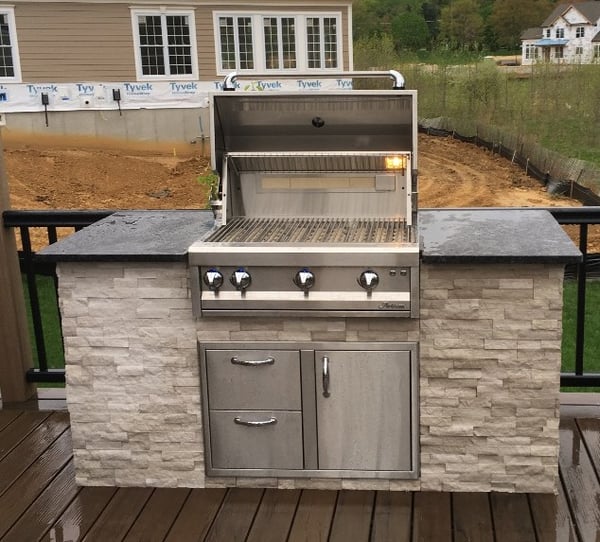 As we can see by the above photo, the recently upgraded Artisan professional series now offers a bright halogen light (a running upgrade will be the addition of a second light to the left hand side of the hood), Other new features include:

The inclusion of the Alfresco ceramic briquettes is a huge step in the right direction for the Artisan grill series. Alfresco's 5-sided ceramics absorb the heat from the burners, retaining and diffusing them evenly across the grill's surface. This will create a cooking surface with even heat so items in the rear of the grill will cook at the same degree as those in the front. As mentioned earlier, Artisan has also incorporated Alfresco's use of silicone sleeves that coat the wiring and igniters. These sleeves are heat-resistant up to 800 degrees (F) so they will go a long way to prolonging the life of these two sensitive grill components.

Another point that is undoubtedly driving Artisan business is the fact that it is not only made in America, but it is made in the same factory, and by the same hands as the folks who create the Alfresco grills. So the shared lineage is not in name only. You would be hard-pressed to find a grill at this price point that can deliver the performance and offer the feature set that Artisan does.