We recently completed an outdoor kitchen project in Pelham Manor, NY that featured not just one but two grills. I thought this would be an interesting outdoor island to analyze as the design was very straightforward and they were able to use a lot of products in a space that could not be considered vast.

When I first met the homeowners they had a few questions and/or issues that needed to be resolved prior construction. 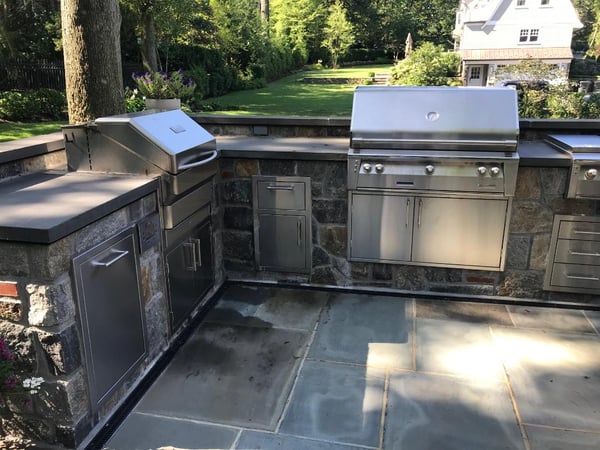 1. What shape should the outdoor kitchen island be?

Due to the size of the patio space, we determined that a U-shaped outdoor kitchen island would work best. This also made sense because the homeowners planned on cooking together since there are two grills in the island. The U-shaped island would work better functionally with two active grills and the requisite landing and plating space needed.

2. What material should the outdoor kitchen island be made of?

The hardscape company who built the outdoor kitchen island decided to build it out of cinder block as opposed to going with the lighter cement-board solution which has grown in popularity. Since this was a patio extension the hardscaper was going to pour a concrete pad so they felt the outdoor kitchen should follow suit and continue from the block build out.

The existing, smaller patio that this was extended from was built from blue stone, so the homeowner chose to use a sealed blues tone counter top and mosaic stone  for the facing. The island was built on the southeast exposure of the property, so they will get heavy sun exposure in morning and noon, allowing for a more comfortable setting in terms of sun for mid-later afternoon when they would likely be entertaining.

3. Which premium gas grill and what size?

The homeowner was already sold on purchasing a Memphis wood fire grill for smoking so he wanted a gas grill that could handle regular grilling, rotisserie cooking and he also wanted a very powerful infrared sear burner that would allow him to sear up food he had smoked on the Memphis. The homeowner is a power-user and intends on using the grill 9-10 months out of the year. Since he would be grilling in colder temperatures he wanted a product with the best design integrity to hold up to elements and best-in-class warranty. After reviewing several brands they opted to go with an Alfresco 42" grill which not only provided the features they sought, but it also offered a deep portfolio of under counter products which they could match with the grill.

4. How to incorporate the Memphis Wood Fire Grill?

The homeowner was pre-sold on the Memphis grill as one of his co-workers had one and attested to its stature as the best premium pellet grill available. He opted to go with the Memphis Pro built in grill  which measures 28" across. Since the Memphis was not going to be used as often as the Alfresco 42" grill, we opted to place the Memphis on the left side extension of the island with ample counter top space next to it to land trays and platters. This decision was also driven by a desire to keep the smoke from the Memphis away from the general cooking area as well as a seating area adjacent to the outdoor kitchen. Underneath the Memphis grill we placed Alfresco 30" access doors and electric so the Memphis could be plugged in. You'll also notice the Memphis built-in temperature control is set on the masonry between the Memphis grill and the trash drawers. 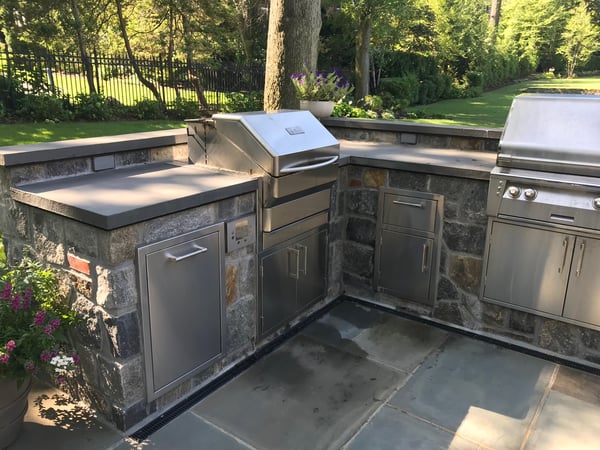 5. How may storage products should be used?

Though the indoor kitchen is nearby, the homeowner wanted the outdoor space to be as independent as possible, thus they included:

While we don't sell many sideburners (most of our customers will opt for a 24" power burner if they are doing an Alfresco, Lynx, Hestan or Blaze Pro outdoor kitchen), the homeowner opted for the smaller side burner so they could conserve counter top real estate. This created another landing area on the 45 degree bend between the sideburner and 18" sink.  As for the refrigerator they went with the 28" Alfresco commercial fridge which not only has the largest internal capacity but will also double as a kegerator. Note the large countertop space above the fridge so they can place trays down and either load or empty the fridge.

If you have any questions about this outdoor kitchen or need guidance on your own project, please contact us at 914-361-1837 or visit us at the Ring of Fire outdoor showroom.