Here we have one of my favorite outdoor kitchens I've ever worked on.

The project was in Armonk, NY in Westchester County. The customer came to us when his backyard was a literal mess of slopes and rocks. When he told me what his vision was, I had a hard time looking past the amount of work that was needed. Judging by the finished pictures, we can all agree that his vision was spot-on!

One of the reasons I love this island is that the homeowner used what I call the "triple-threat" approach in terms of his grills. He used a 42" Alfresco ALXE42 as his anchor, a Kamado Joe Big Joe for grilling/smoking or anything dealing with live fire cooking, and he also used an Alfresco VersaPower cooker AXEVP for a variety of uses. This 65k BTU power burner allows you to use large stock pots, woks, commercial teppanyaki griddles and more. The burner's versatility is simply unmatched. Key point: note the placement of the Kamado Joe - it is angled into the island and avoids both the upper patio area where there is seating as well as the lower seating area. This was done in order to be avoid excess smoke infiltrating the seating areas. 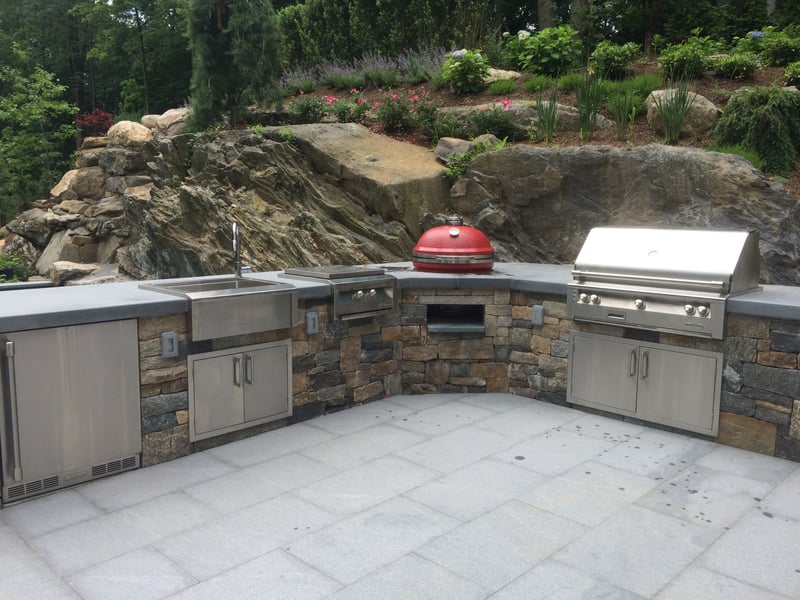 Due to the size of the islands the homeowner needed ample space for storage. Working from left to right as you face the island, they used the Alfresco URS1XE refrigerator, which at 28" is the largest outdoor refrigerator available. And remember, the refrigerator also doubles as a kegerator with the purchase of the keg kit accessory. Next they used the AGBC30 Alfresco sink with 30" access doors underneath. They also purchased the bartending package for the sink which comes with a variety of accessories such as a cutting board, speed rail, drain/stopper and more. After the sink, power burner and Kamado Joe which are all built into the countertop, the next undercounter piece are the 42" access doors under the grill. At this point, the homeowner does not have any sealed storage in the main island, so they opted to place a 42" tall dry storage pantry in a separate run next to the main island 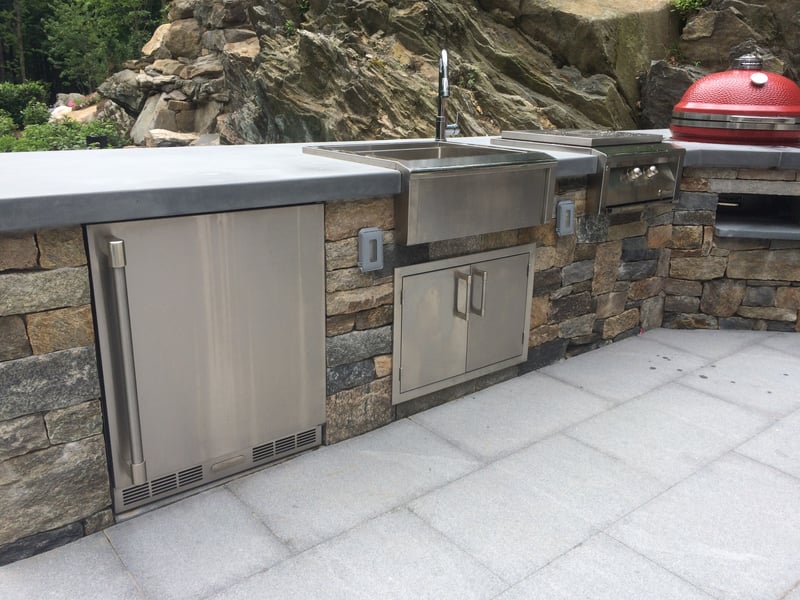 The homeowner used his pool contractor to build the patio and outdoor kitchen. They built the structure out of block and matched the countertop to the bluestone patio floor. For the island facing they went with a mixed earthy stone that picked up the colors of the ipe wood used on the upper patio. Water, gas and electric were all run out to the islands from the home and extended to the pool area. 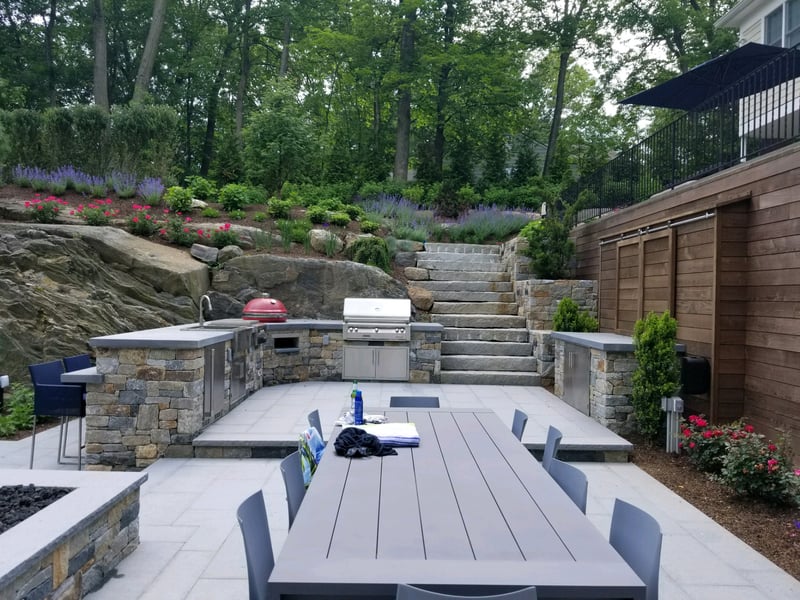 What Would I Have Changed?

It's difficult to find any flaws with this outdoor kitchen. They have ample counter space, the grills are laid out in a logical flow, and they placed the spots where the grills exhale smoke away from the two entertainment areas. If I nitpick I would say that I would have placed another storage product in the run. The main kitchen is upstairs so it's imperative that they maximize their storage space lest they make multiple trips up and down their steps. They also didn't use a trash drawer which would have been useful.  So I would have added the dual trash and at least a 3-drawer system or the Alfresco AXE-3DRTH which offers three drawers of storage as well as a paper towel pull out.