Traeger Timberline 850 Review: How I Ruined a Full Brisket

When you read through the reams of online content devoted to grilling, much of what you see will be highlighting best practices on how to ace your next bbq cook. They are certainly helpful but at times I like to take the contrarian approach, instead highlighting how I completely screwed up a cook. I feel that this approach is at times more valuable and in many cases funnier to read for beginner to intermediate outdoor cooking enthusiasts. So,on to my latest disaster...

Smoking a Brisket on my Timberline 850

It had been some time since I had smoked a full packer brisket, an exercise which is daunting due to my schedule. I picked one up from the Morris Park Butcher in the Bronx, and this was the largest I have ever cooked at 16lbs. I loaded it up with Meadow Creek's Brisket rub as well as Jacobsen's hand-harvested coarse sea salt. and got ready to put that brisket on the my Traeger Timberline 850.

My game plan was to cook it at 250F for about 12 hours. So that meant I would load the Timberline 850 at 10 pm on Sunday night and then would check it Monday morning and wrap / rest it, shooting for an overall cook time of about 16 hours. I cleaned out the firebox, fire pot and grease tray and loaded the hopper with Lumberjack Pecan pellets. I went to bed that night with a smile on my face, envisioning wisps of Pecan smoke curling around that glorious piece of meat through the evening.

The next morning I went outside at 7am and immediately realized something was amiss as:

1) I did not smell any smoke

2) I did not hear the Timberline's fan running.

I went to the front of the Timberline and saw the dreaded error message:

LEr – Low temperature error. The temperature is running below 125°F for more than 10 consecutive minutes.

I opened the lid and the interior of the TImberline was not warm. I then opened the hopper and saw that there was a ring of pellets on the sides of the hopper, almost in a circle, with the middle area devoid of pellets. So it appeared that the auger had stopped feeding pellets.

My mind started racing....how long had it been since it stopped burning pellets? I was going to have to piece together clues and deduce like a Sherlock Holmes of BBQ.

The grill was cold. The brisket had a little bit of warmth to it but not much. There was no smell of smoke, so I started to think that the grill may have shut down hours before. But then I looked at the brisket and it had already changed to a dark  cherry/black color. I probed it with my Thermapen and it read 147. So it had cooked for awhile...I decided to go on the assumption that the grill stopped feeding pellets 2-3 hours prior so that meant that the brisket had received a good 6 hours of smoke.

Nonplussed, I re-started the Timberline 850 at 250, poured more Pecan pellets in and let it ride till noon, so another 5 hours in total.

I returned at noon, wrapped the brisket tightly with double foil and let it rest in a cooler for about 5 hours. When I pulled it the brisket was reading 203F.

So you can imagine what I felt, after enduring the grill issue and having to run back 3x to check on the cook (was not using wifi) when I unwrapped the foil from the brisket, gave it a poke and...was met with tough, deadened response. No jiggle. No juice meeting my finger as I poked it. Just dry resistance. It was at this point that I knew I was in brisket hell.

I brought out my Victorinox knife and started to carve her, and while the first cuts were exemplary with a pronounced smoke ring and moistness oozing from the meat, that would not last very long. As I got to the flat I was met with greyish dry cuts with pronounced shades of white. It felt like I was cutting through wood. I continued to carve and was able to salvage about 30-40% of the brisket. After handing off the "salvage" plate to my daughter so she could share with the rest of the family in the kitchen, I sunk into a chair outside, sipped my Finback IPA and said to myself, "There must be a lesson learned from this." 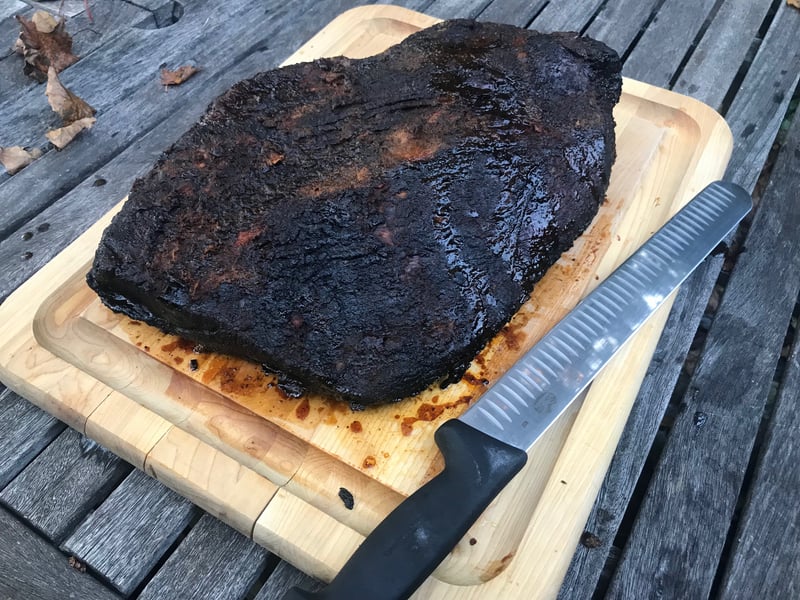 What Screwed Up the Brisket Cook?

I thought long and hard about this. I talked to other bbq enthusiasts, some of who know a boatload more than me. How did this get screwed up?

Here are my theories, starting with the most likely.

1 - The failure of the pellets to keep feeding into the auger was too much to overcome. Once this happened I was literally flying without radar. I had no idea how long the brisket had cooked for and what max temp it had reached. For all I know it could have stopped 5 hours earlier and seen an appreciable temp drop. Running with the evidence of a darkened brisket and that a decent amount of pellets were chewed, I estimated that it has been off for around 3 hours.

2 - Placement of the Brisket on the 850 - for this cook I placed the brisket on the bottom shelf of the Timberline 850 and I placed it on a metal sheet pan so the drippings wouldn't hit the Traeger Timberline 850 and potentially cause a major flare up. In hindsight this was a bad move. The metal pan was likely conducting heat through its surface and passing it along to the brisket. I also had the brisket placed on the lower rack position on the Timberline, not the middle one which is where most hardcore Traeger people will tell you is where that brisket needs to go. For my next cook I will move the brisket to the middle rack and see if there is a major difference.

3 - I didn't use a water pan. I typically place a pan of either water or beer in the smoker, under the brisket. so the air will stay moist throughout the long cook. This time, I did not do this. Could this have contributed to the dryness of the brisket. Likely not a major cause, but certainly didn't help matters.

4- I was using a frozen brisket.  Typically I purchase my brisket from the butcher the same day or the day before I cook it. So it stays in my refrigerator until it's time to cook. This time, we purchased the brisket and then froze it for 2 weeks prior to the cook. It had to thaw for 2-3 days in the refrigerator before I started the cook. Could the up and down temp swings contributed to the problems I had with the cook? I will need to ask a butcher or meat expert. Nevertheless, moving forward I will plan on limiting the storage time and will try to buy when its time to cook.

In my opinion, after a failure the only course of action is to dust yourself off, learn from the experience and get back in the saddle. That said, I will be purchasing another full packer brisket for this weekend and will be cooking again on the Timberline 850. I'll be making several adjustments and will be reporting on the results shortly thereafter. Stay tuned!